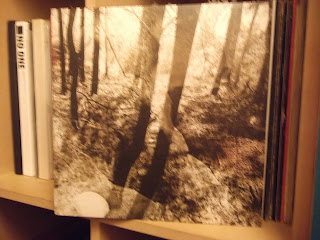 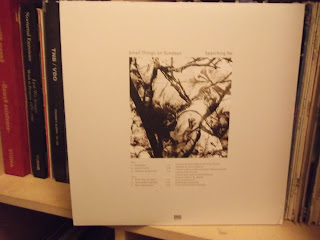 It seems to be this time of year that folk are writing up their top ten / twenty lists of 2012. But there's still a couple of weeks to go...steady on chaps. I was reading one list that mentioned Mike Connelly's project Failing Lights and the LP "Dawn Undefeated" on Dekorder Records, I never knew that existed...ordered straight away, it probably won't arrive until 2013 so I am not going to be hurrying with my top twenty..isn't there a Trepaneringsritualen LP out on New Years Eve?
An album that has been hogging the turntable over the last few days (great band) will not be in the 2012 top twenty lists...it isn't out until next month. Danish duo Small Things On Sundays have finally made it onto vinyl and produced a cracking album called "Searching For". (Skrat Records:skr~011). "Searching For" is the third part of a trilogy that began in 2010 with the CDr "4 AM" on Moving Furniture and followed by "More" released by Striate Cortex in the same year.
The album starts with "Enceladus" (an Earth like moon that orbits Saturn). A very atmospheric piece, layered and drifting drones giving the soundtrack of deep space with echoed guitar. I am immediately drawn to compare Small Things On Sundays to Origami Galaktika and Manipura both who released similar sounding albums back in the late 1990's. (And both on the Speeding Through My Hemisphere label. Whatever became of them)? "Enceladus" could be called Inade Light. The Cocteauesque titled "Liquid Mirror" follows with its sound of floating ethereal drone and guitar echoed to the max. This kind of guitar strumming is always going to make me drift off into Durutti Column territory. "Isthmus To Oblivion" ends side A in a peaceful manner. Viola and toy piano and a Soviet France style chopping guitar. (Think "Mohonomische").
Side B starts with "Echo Lake At Night", a sad piece that just floats...hangs in the air, low like an Autumn mist...distant discordant keys of a broken piano is haunting and beautiful. "Terracotta Fragment" breaks the ambiance of the first four pieces with its' loud piercing drone. It operates at a different tempo and in a different time. A shame, it sounds like a "filler". The final piece is one of the finest pieces I have heard for a long time. "Two Instruments". Fast strings meet slow strings. Very clever. It builds like a jigsaw...a soundtrack to an awakening, a shamanistic ritual, realisation. A track that makes me want to turn the record over and start all over again. Brilliant.

Small Things On Sundays are from Copenhagen, comprising of Claus Poulsen and Henrik Bagnar. They have a website www.smallthingsonsundays.dk as does this albums label skrec.wordpress.com I strongly advise folk to pay a visit, get in touch and put your name down for one of these LP's