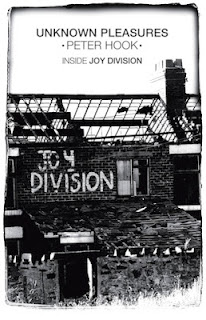 After the films, the documentaries, the endless re-releases, the Internet forum boards and books, is there anything the world does not know about Joy Division? After reading Peter Hook's autobiographical tale of his time in Joy Division I would say ... probably not.
That is not to say it is a bad book, au contraire, it is a page turner and a fascinating story, and we now know that Peter likes a bit of a moan now and then. Joy Division (and before that Stiff Kittens & Warsaw) wanted to be part of the growing Manchester "punk" scene, spurred on by the Sex Pistols appearance at Manchester Lesser Free Trade Hall in 1976 and encouraged by Richard Boon and the Buzzcocks, both Bernard Sumner ("Barney") and Peter got hold of some guitars and formed a band. And like I said .. the rest is (well documented) history.
What we have written here is Peter's dissatisfaction with other members of the group...especially Barney..and his dislike of being treated as a second-class member because he was the one who drove the van (the shandyman) and had to pay for its' upkeep. I also learnt that Peter liked a "jape" or two - I hate that word "jape", it crops up a lot in this book. Pissing japes mainly, on other bands equipment, in glasses and on venue floors. Japery kings! They also liked "shagging". Joy Division were not high art intellectuals as perceived by others, they were lads in a rock band out to do drugs, drink booze and shag women. fair do's.

The book did make me wonder why Peter carried on being in Joy Division when he wasn't enjoying it, or speaking to the other members, and feeling like he was being used by management and other members and Factory Records. Why didn't he just leave and form another band. I know from when I've been in bands that when it stops being fun I leave or the one(s) that are being a pain are asked to politely "fuck off". But, for any lover of Joy Division, of punk, of post-punk or of rock autobiographies in general this book is essential.

I remember Joy Division well. I was not a "big fan" of their stuff but I had it all because I collected Factory Records. I also collected Fast Product too so had their tracks on "Earcom 2". Some of their songs were OK, but I preferred A Certain Ratio, Section 25 and The Durutti Column. I never went to see them live either. Passed on the chance of seeing them with Buzzcocks in Sheffield. My friend Mark Collins organised a mini bus but I couldn't be bothered. Didn't like Buzzcocks either, and perhaps Cyanide or Chelsea were on at Lincoln AJ's the same night ... who knows? I did venture to see New Order a few times between 1981-1984 - they always had superior supports; Section 25, Minny Pops, Crispy Ambulance etc.

Anyway. "Unknown Pleasures:Inside Joy Division" is a good book, a quick read that made me smile. There's a track by track synopsis for both their LP's and a timeline feature (important to all facebook users) so the reader knows what is happening all around whilst the story of Joy Division grows ...
The book cost me a tenner from Amazon. Recommended.