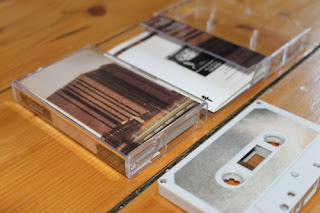 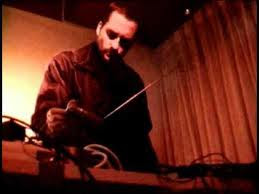 Have just spent a pleasant while listening to the latest release by Swedish composer Henrik Rylander. Henrik has a synthesizer (and an ear) for a glorious bass sound. It is textural, gripping and it feeds my bones. With this (and other elements) he has produced the mini-album "The Horror". Parts play like a soundtrack album, Sci-Fi elements (think John Carpenter) and visions of empty deep space. "The Horror" is clever stuff.
"Malodorous Motion" kicks the album off. I pressed the play button and was rooted to my seat; where the fuck did that sound come from? To describe this piece would be like giving away the murderer in a clever whodunit. No spoilers here...just get this tape. "Teeth And Talons" has a great bass tone loop. Hard, looping, swirling and scraping. Instantly grabs the attention, and by now the great joy of listening and experiencing has taken over. Not many similarities came to mind whilst playing the tape, but there are sections of this piece that brought to mind the 1984 collaboration between Frank Tovey & Boyd Rice ~ "Easy Listening For The Hard Of Hearing". (one of the all time great album titles). "Deconstructure" is more horizontal and flat, the sound of shifting sands...and again it is the bass texture / frequency / whatever that makes this piece a joyous listen.
Side two starts with "Eminence Fracture". Side two starts with a hammer, a hard hammer. Side two starts with a forge hammer and the sound of escaping gas. The (now) obligatory synthesized bass drone and frequencies along with scrambled communication lines. Lost in space aboard the Dark Star. "Any Tongue Now" is the end of the journey - electronic lines creating patterns. Still walking, just drifting....

Swedish label Hasten & Korset (sounds like a Scandinavian comedy duo) have put out this C30 cassette. Beautifully and professionally packaged / designed. Glossy full colour fold out sleeve and pro-dubbed and labelled tape. I am liking what I have heard from Henrik so far. That's this tape, the CD "Power Model X" on Ideal Recordings (thanks Morten) and a DJ session at X Club #2 in Stockholm in April. Henrik used to be part of 1980's/90's Swedish psychedelic rock group Union Carbide Productions (never heard any) and is also part of the Swedish avant rock group The Skull Defects (never heard any)...but if found I will be tempted...and also goes to show I do some research!
The Hasten & Korset catalogue looks interesting with releases by Altar Of Flies, Joachim Nordwall, Optic Nest and Black River Pregnant Band amongst others and an interesting compilation series called "Tapeworks", have a browse at hastenochkorset.tumblr.com this stuff comes recommended.