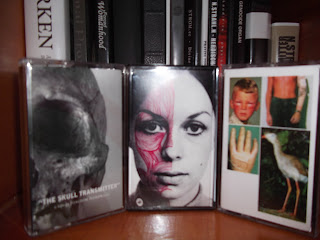 As mentioned earlier I have been listening to a lot of stuff that has come out of Sweden lately. This weekend has been Hasten & Korset weekend, where Hartop Towers has been resonating to the sounds from the small label operated by Mattias Gustafsson of Altar Of Flies.

"Tapeworks Volume 2" is a compilation of groups/projects that record and release on cassettes. It acts as a sort of work in progress, small sketches and experiments, a cassette tape salon. Each side starts and ends on small pieces with the body of the cassette being noises made by Sewer Election and Idea Fire Company. Dan Fagerstrom (of Optic Nest & Cryme) starts side one with a small introduction..an industrial awakening before Sewer Election present "Ga Forlorad". This piece has a lovely warm electric hum, an eardrum buzz throughout. The sound is of looping tape being pulled back and forth over tape heads and adjustment of reverb. Side one ends with Altar Of Flies and "Do Not Trust A Memory". Some of the noises here sound that they have been recorded underwater, some under a train! Beautifully constructed, parts sound like a (mental) collapse with crashing junk noise. The more I hear Altar Of Flies the more I like.
Side two starts with US outfit Preggy Peggy & The Lazy Babymakers and a short piece with an incredibly long title. Preggy Peggy is the project of Angela Sawyer an artist who works in the free-improv. noise arena. A stretched and strained voice reads a poem. As mentioned the main bulk of side two is by Idea Fire Company and a piece called "Oslo". I know IFC have been active for over 20 years but this is my first exposure to them....A friend (Simon Kane) did play me some Scott Foust recently and I really liked what I heard (I think it is a forthcoming Entr'acte release)...and now I think it is too late to discover their catalogue - I'll forever be buying Idea Fire Company records, but "Oslo" is quite brilliant. It is a (live) stereo recording of piano and cornet. I got lost in this piece. Beautiful and serene. Instantly reminded of the section of "Tearing Up The Plans #1:7.18 Version" by 23 Skidoo where the rhythm breaks down to piano and trumpet and a voice repeating "who can tell us what force is", that is exactly what it sounds like. The cassette ends with a short analog sequence/synthesizer piece by Dan Fagerstrom.
"Tapeworks Volume 3" is byMattias Gustafsson. This cassette is a C31 and made up of four pieces of random noises recorded using various types of microphones and locations, sometimes there is a synth noise, sometimes various equalizers and effect pedals are used...it sounds like source material for an Altar Of Flies CD. It is abstract and concret and not the easiest of listens.
Both volumes of "Tapeworks" are packaged with quality colour sleeves and full information. Volume 2 has a cover that reminded me of the Felt 7" "Penelope Tree".

A couple of years ago Hasten & Korset released "The Skull Transmitter" by Joachim Nordwall. Joachim owns and runs Swedish label "Ideal Recordings", is a member of the band The Skull Defects and also has a great blog called "Deep Shit". "The Skull Transmitter" is a half hour pleasure ride beginning with a motorik pulse (sounds like an old Korg sequencer to me) that moves with speed and pace like an old Tangerine Dream soundtrack (therefore early Throbbing Gristle) dropping depth charges along the way before entering battle with soaring synthesizers, admitting defeat and disappearing off down a side road. Side two is an ocean of frequencies, piercing waves spill and collapse around the ears. The notes on the cover tell me to "play loud ~ the skull is a transmitter". I play loud and the sound is all consuming...the frequencies break into a murky morass...a calming vibe. Thoughts of The Anti Group and their Meontological Research Recordings come into mind. The sound is still pulsating, still throbbing, still waving. Sonambulistic and more like a Popul Vuh soundtrack. This could have easily been an hour long CD. Cracking stuff.
The cassette is "for Leif Elggren"..perhaps he used the sounds for a performance? This cassette is catalogued as number 39. "Tapeworks Volume 3" is catalogued as number 49, I can't believe I have discovered this label so late!!! Along with the excellent Henrik Rylander cassette and Altar Of Flies CD (mentioned in an earlier blog) this label is one to watch and consume.