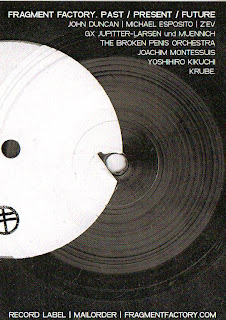 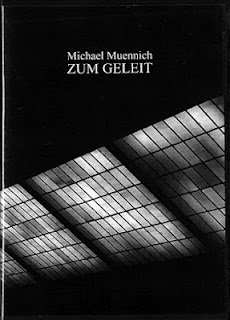 Have just spent a pleasant while listening to the latest release from German label Fragment Factory. "Zum Geleit" by Michael Muennich. That's "Escorting" to us English readers.
Fragment Factory seems to be getting itself an identity. After early releases by "noise" projects the label seems now to be releasing material by sound explorers, conceptual artists, recordists...it is developing into a fine ear. My first exposure to this label was through the cassette release by Berlin based artist Alex Schneider (AKA Krube), and then there has been collaboration recordings featuring EVP pioneer Michael Esposito and Kevin Drumm and "industrial" stalwarts Z'ev and John Duncan. Last year saw the release of the Michael Muennich cassette "Rugged" as well as a collaboration with GX Jupitter-Larsen on 7" vinyl.
Both myself and Michael contributed a cassette for the Lucas Abela "Mix Tape" exhibition that took place in June last year in Australia.(common ground).
And now there is "Zum Geleit" a white 3"CDr packaged in a small plastic wallet. The sound is elemental. To these ears the sound is of rain. The layered sound of rain upon a variety of surfaces. The sound of rain upon various surfaces slightly tweaked and treated and expertly looped. Perhaps the rain is recorded on the glass and metal roof of the building that adorns cover and insert of this release? Perhaps it is not rain at all but insects or dead air space...but to me it sounds like rain. Immediatley the 400 Blows track "399 To Go" is brought to mind...really, dig out the 1989 compilation LP "Yesterday, Today, Tomorrow, Forever" on Concrete Productions and give it a listen. There is also the sound of metal and wooden wind chimes in the mix.
The piece is seventeen minutes long and totally engrossing. It also notes that the CDr was mastered by (the master) Phil Julian. I think it won't belong before there is a Phil Julian / Cheapmachines release on Fragment Factory.

One of the "things" I like about Fragment Factory is their release formats. They put stuff out on CDr, cassettes aswell as quality vinyl - that is excellent to see. I do know people (I won't name names, let's just call them ... idiots) who won't put their stuff out on cassette or CDr because they believe it is an inferior format. They'll never learn (great song)!
I can only take my hat off to Fragment Factory, a label to keep an eye/ear on....soon they shall be as essential as fellow German labels Pan and Tochnit_Aleph.