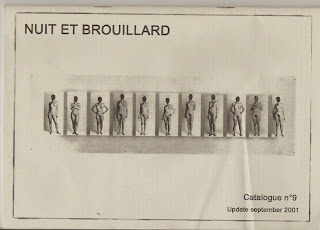 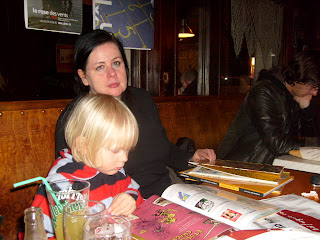 Today I was hunting for an old magazine and chanced upon an old Nuit Et Brouillard catalogue. This stopped me in my tracks and I closed the lid of the suitcase I was looking through and settled down to read the pages....Dead Letters Spell Out Dead Words on the stereo. Lovely.
I did used to have a collection of Nuit Et Brouillard catalogues, where they have all gone is a mystery...
Back in the days before online shopping the way to buy "decent" stuff was through catalogues such as Nuit Et Brouillard. There was also RRRecords, Cheeses International and Tesco Org. Distribution - they too provided lovely catalogues two or three times a year. Although basically the catalogue is just a list of releases with a description, with N&B I felt that I wasn't being given the "hard sell", their descriptions were honest and it was obvious that they had listened to the release and given thought in to words...not just reprinted some promo blurb. The catalogues were superbly laid out - Record labels listed alphabetically by country. So simple.
I used to love the way that after a description of the sound N&B would add...."to discover". Brilliant...and discover I did.
The first time I saw a Nuit Et Brouillard catalogue was in the house of Mick McDaid (he of Outsider Records) in Lincoln. Then on a rainy night in Northern Belgium in 1998 I found myself at a gig where there was a N&B stall. I bought and signed up to their mailing list.

The onset of the digital age and the worldwide web has seen the printed catalogue disappear. A great shame, as the catalogues were (in their own way) great works of literature / graphic design. I used to spend (enjoyable) evenings with the N&B catalogue making lists of what I would love to buy and/or hear. Back in those days I didn't used to have a television set (or a wife)!
Just over a couple of years ago I was lucky enough to spend a few days at the house of Nuit Et Brouillard in Lille (France), guests of Stephane & Sylvie, and I saw their stock! They are still a great distribution outlet and live promotion outfit.
I have just spent the last couple of hours lost in their 2001 (update) catalogue. It's a fascinating read.