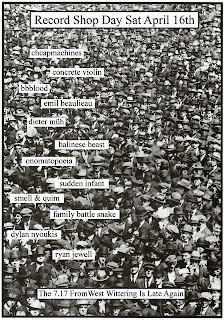 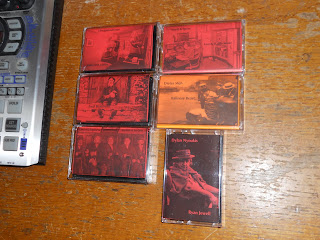 I don't like to use this site for selling my wares or advertising my goods etc, hopefully there will be a fully blown Haemoccult Recordings Web Site to take care of all that later in the year, but just a quick mention of one of the more obscure / limited Dieter Muh releases.
Saturday April 16 was "International Record Shop Day" and to mark such an occasion London based label The 7.17 From West Wittering Is Late Again released a series of cassettes called "You Are Playin' Like A Fuckin' Pub Band". The cassettes were on sale (only) at Second Layer Records in North London. Each cassette is limited to 30 copies and each featured an artist / project from the UK and an overseas artist / project.
The line up is such:
1: Cheapmachines / Concrete Violin
2: BBBlood / Emil Beaulieau
3: Onomatopoeia / Sudden Infant
4: Dieter Muh / Balinese Beast
5: Smell & Quim / Family Battle Snake
6: Dylan Nyoukis / Ryan Jewell
The Dieter Muh track is a 15 minute extract from the soundtrack "Burning Dogs Teeth" recorded earlier in the month with Michael Parker and using samples of the work of Schuster and Muhviertel. The Onomatopoeia track has the beautiful title "LSD Trip In A Police Cell", and my favourite of the collection (at the moment) is Sudden Infant's "Giving Trash Ritual?".