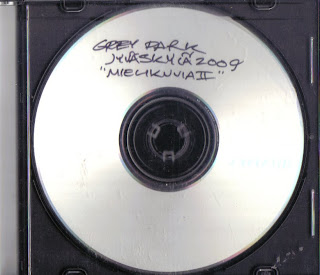 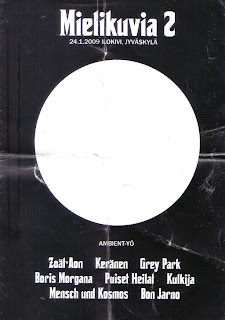 Got a package through from Hyster Tapes yesterday. Always a pleasure. A batch of Grey Park CD's, a couple of Hyster Tapes releases and a Jan Borno CDr. With a break in work I settled down to the CDr "Live In Mielikuvia 2" recorded live in Jyvaskyla January 2009. The performance took place inside the Ilokivi, a small studio theatre situated in the University grounds. An excellent venue. I know - I have played there too back in 2000, the year I met Grey Park.
Here's what the letter says: It pretty much sums it up:
There are four people on the stage: One sits on a chair alone with acoustic guitar wearing hat and sunglasses. Three other people sit around table that has all sorts of electronic gadgets on it. People around the table start to play the gadgets, they play for 23 minutes of improvised drone-noise-ambient and then quite suddenly stop - then the guitar player, that hasn't done anything yet, been just sitting there, starts to play immediately after the drone -noise has withered out. The three people leave the table and the stage, guitar player continues to play for some 10-15 minutes and then stops and leaves the stage. Applause.
Rather like the Hyster Tapes release of Grey Park live at Ko-Ko the actual meat of the sound - the Grey Park live bit is excellent. Low hums and drones, punches, sequencers, shortwave radio etc all build and veer off in to different tangents, cracking stuff indeed. But the last ten or so minutes of solo acoustic guitar is just awful. Nice idea - badly executed.
It is like one of those parties I used to go to way back when. Not a party I would have chose to go to but that's where the evening was ending up and it was where the wine, women and whizz was. Let's say (for instance) a party at Itchy Dave's on Robert Adam Crescent....The host denies the existence of punk and the night is spent either in one room listening to Asleep At The Wheel or Joni Mitchell or in the other room where a twat in a hat is slumped in the corner with an acoustic guitar he cannot play but insists on letting everybody know it. That is how the CDr ends. Well done for getting the applause!
The Grey Park section reminds me of Contagious Orgasm.
If I was ever to be asked to curate an evening at the ICA or do one of those Meltdown things at a Butlitz on the South-Coast (and let's face it chances range between 0 and -1000,000) Grey Park would be the first name on my list.
If you are unaware of them, Google them, write to them, buy their stuff!
Pics:
1: Grey Park CDr.
2: Inside Programme Notes for Grey Park.
3: Concert Programme Cover.
Posted by Steve at 13:40