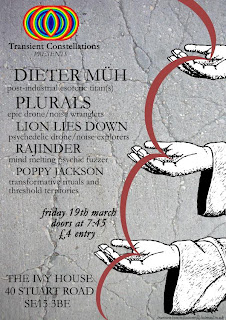 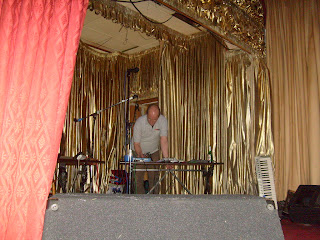 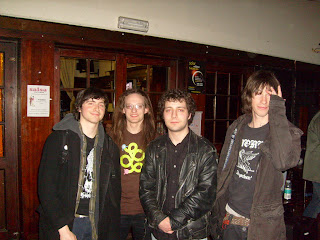 At the beginning of February I was asked by a chap called Max if I was interested in playing (as Dieter Muh) a small venue in South London. Low Key / Low Fee. I agreed, mainly as I saw this gig as a chance to see what I could do as Dieter Muh as a one-man performer and whether or not it was going to be worthwhile carrying on in the future. Also was the fact that Plurals were going to be part of the evening too.
The venue was the Ivy House in Nunhead - or Peckham Rye depending on which "Pub Guide To London" you google. At the back of the pub is this small "Victorian" theatre, its' main use being a comedy club. Dominic Holland was on the night after Muh. It is a great find, a lovely venue with a good house PA and lighting rig but it is off the beaten track. Off the circuit. Not on a bus route or underground line, and about a fifteen minute walk from Nunhead train station. Overland train from Victoria to Dartford. In London terms I would say ... remote. Friday night was a wet miserable night too and obviously not for the adventurous Londoner. I don't know how Max (and his organisation "Transient Constellations") advertised the evening. He mentioned Facebook, and some how I doubt he stuck posters and flyers around the record shops, book shops and cafe's of the capital. But, this was only his second foray in to gig promotion and I was hoping for a small audience to try my virgin material on.
Schuster mailed me a 23 minute spine to work around. Dave giving the diktat last year that I could not use any "old" Dieter Muh material - no greatest hits tour...sorry! "It doesn't matter what you have done; It's what you do next" being my mantra, I worked around samples of scraped strings and metal to two rhythms from my newly acquired Electribe. I really enjoyed it. Really. Even dropped out the spine a couple of times and whispered words in to the microphone. First gig in 31 years of gigging as a solo performer and I really got into it! The guy behind the mixing desk did a great job. Tim Drage from Cementimental.
I am now ready to continue as Dieter Muh. New recordings shall begin.

The show ran late. Even by the official doors opening time only myself and Plurals had soundchecked. I simply line-checked as the clock was ticking. Rajinder fully soundchecked and half of Lion Lies Down turned up half an hour after doors opening time and then they did a full soundcheck. Incredible! Shades of Skullflower at St. Giles here. So after spending 30 odd minutes listen to two folks soundcheck we had to endure their full sets. Strange ritual but I think Max was unconcerned. Rajinder was a solo guitarist who seemed to play the same "riff" but through varying effects. He reminded me of a rhythm guitarist in a desperate need of a band. Lion Lies Down started off OK. Electric violin and synth drone. Images of Zos-Kia in their Nekrophile stage. And then something happened. They went very "funny" with some Stooges song (Maybe not the Stooges but it sounded like "Raw Power" to me) then some drumming. I have a feeling it was their first gig - it was a bit all over the place. Poppy Jackson I just didn't get. Sorry Poppy. And then. Plurals. Three members went on stage, plugged in their various electronic machines. The PA fizzled and popped and with a bang their set ended. Maybe 15 maybe 30 seconds in. One of them shouted "Fuck It" and it was all over. Something blew. I shall now have to wait to see/experience a Plurals live show. I think because the evening was now running ridiculously late they couldn't be arsed to sort the problem out.