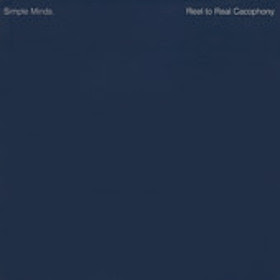 All of this is true : The year is 1979, it is the first week of December and I have been given some money by my Mother for my birthday. My 17th birthday. It was a Saturday and it was snowing. Money burning a hole I walked the mile to the bus stop to catch the No.7 bus in to Lincoln. Destination Sanctuary Records on Park Street, the bestest damn record shop I have ever been in. (Except the record shop that Steve Underwood + I found in Stockholm that sold secondhand punk/new wave vinyl, horror videos and hardcore porno mags...but I didn't buy ought from there so that doesn't count). Out that day was Simple Minds "Reel To Real Cacophony" on Arista. Fashionable label eh? Home of Japan and the first "punk" band I ever saw live - The Secret. I bought (probably for £3.49) and headed to The Cornhill Vaults for a pint and a devouring of information from the sleeve notes. At this time I was aware of Simple Minds, but certainly not a big fan. I liked the "Chelsea Girls" single but found the first LP dragged a little. Anyway, the album title, the song titles the sleeve (blue velvet and dimpled) attracted me enough.
Back home I played the album non stop. Every track was a winner. It fitted with my love of Ultravox!, Tubeway Army, Magazine, XTC etc. I even used to learn the drum patterns on my old drumkit. Slip the old Ear-Sweater headphones on, turn the volume to max and thump away with cushions on the drum skins and air cymbal.

In 1990 I decided to start collecting vinyl again. (And tapes, and later entering in to the spirit of the 20th Century CD's too). A lot had happened to my favourite bands since 1983, a hell of a lot of them had gone naff, this of course had tainted my view of their work. Gary Numan being prime example. Adam And The Ants, The Jam ("All Mod Cons" was a favourite back in the day when I had a bedroom I called my own). I just could not re-buy their albums and have them sat alongside modern classics like Column One, Genocide Organ or Smell + Quim. Gradually Adam and other naff bands like Psychedelic Furs and The Cure have made it in to the racks. "Dirk Wears White Sox" is an album I shall be buried with.
Simple Minds were on this "cannot buy" list

Jane Newton put up a Simple Minds clip on her blog site. It took me back to 1979, I had to buy "Reel To Real Cacophony" album again. I found the digitally remastered CD dirt cheap on Amazon.
To hear it again for the first time in nigh on 20 years was a very tearful experience. I was not just hearing the tracks I was transported back to North Hykeham, to my bedroom, to being 17 again. It is a timeless classic. Listening to the album now (especially on headphones) it is amazing. So much is going on in there, beautiful synthesizer and echo FX, a lot of upstroke guitar and octaves. Multi-layered vocal effects. Just damn clever. (As you can tell;I am not a musician). It is very related to Ultravox!, that is clear, but I also hear a lot of Eyeless In Gaza too - especially the vocals. They are so indecipherable that I make up my own lyrics as I sing-a-longa Jim. (I do the same with EIG songs). Songs end up surreal and sounding like a Burroughs cut-up prose piece. There are a few instrumentals too. Very brave. One in particular "Veldt" sounds like Brian Eno. No, I am glad I re:bought this LP. Classic.
So Simple Minds were only a two album band. Like Psychedelic Furs, Gloria Mundi, The Damned and ... well add your own name. Still, it is one album better than Adam And The Ants.
But why did they go pants? Why, when they could have gone down the electronic/experimental song path did they throw their hat in to become "Stadium Rockers"? Support to U2 and all that jazz? Money obviously. I know that, I'm not bloody stupid, but where the integrity?
I saw them live at Futurama 3 festival. Bingley Hall but by then it was all "Empires & Dance" and shit.
Now - should I buy "All Mod Cons"?
Posted by Steve at 21:55