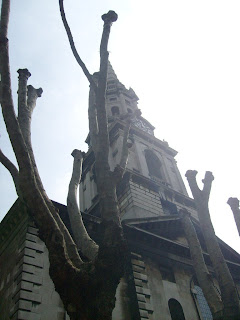 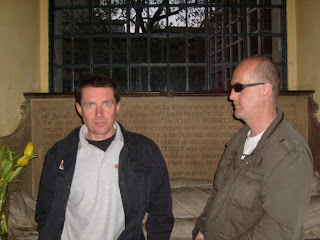 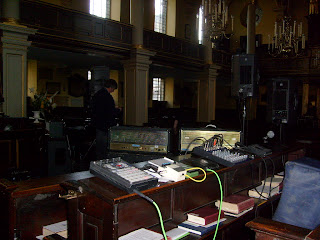 Live performance number 38 for Dieter Muh was inside St Giles in the Field church in central London. The gig was organised by Second Layer Records and Turgid Animal Records.
It was nice to be asked. We were playing support to Skullflower but that didn't put us off - we wanted to play in a church. Mess with the acoustics somewhat. A great opportunity.
Our previous live outing was at The Cavern in Exeter. Then we played a largely improvised set. No spine to work with - no backing on the mini-disc, so to speak. This performance Dave and I decided to do 100% improvised. We discussed on the telephone what samples we were going to be using and what we wanted to do with the space. No hard pulsating rhythms, no vocals (or at least no lyrics), no guitar solos.
What happened was a 40 minute set where Dave reprised the "old sample" called "Burning People". This was a sample that we first worked with in 1984 when we called ourselves Diet Of Worms. We created an atmosphere, experimenting with the sound of bowed cymbals, gourds, chanters, escaping gas, slowed drill and spoken words all around the loop of a woman claiming "WE ARE BURNING PEOPLE". Dave and I managed to set up in the choir stalls and performed opposite each other, conducting each other with our eyes. The set worked - especially for the first twenty and maybe last fifteen minutes. We finished in silence. I think we shifted one album from the merch' stall!
Dieter Muh gigs, for Dave and I, were social events as we very rarely got to see each other in life outside of Muh. This gig was not a social event. Skullflower messed Pete of Second Layer about by not showing up until very late and then demanding outrageous soundcheck time, leaving the people milling outside in the cold. I was there when the PA arrived and the only member of the band that had showed refused to help carry the equipment because he has a bad back. Even when it came to packing up after the gig, they didn't help.
It was certainly an experience playing in a church. Would love to do it again.
Posted by Steve at 11:13