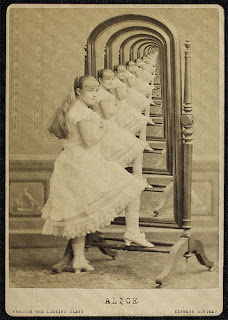 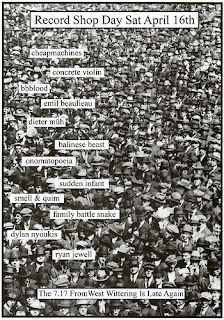 Whilst playlisting this programme I was looking at the above flyer, it is framed and hanging on my wall next to the turntable and it suddenly clicked that this broadcast was quite close to "Record Store Day 2016. In fact 16th April 2011 was a Saturday too … so I decided to play the Dieter Müh track from "You're Playin' Like A Fuckin' Pub Band" a 6xC30 compilation release by The 7:17 From West Wittering Is Late Again" label. A release made especially for 2011 Record Store Day. Or RECORD SHOP DAY as it was called back then.
Of course, five years is a long time in Rock n' Roll. I always thought the idea of Record Shop Day, it's premise, was to get folk in to the shop, the independent record shop, to see what pleasures and treasures lie within and by doing so they could pick up a release that was only available for 12 hours or so from that shop. Or only available from independent record shops on that day. "You're Playin' Like A Fuckin' Pub Band" was only available on April 16 2011 from Second Layer Records, a fine but sadly now defunct record shop in Archway, North London.
2016 and Record Store Day is big news. BBC Radio 6 are celebrating it. Soon it will be as important as  shit on your boots at Glastonbury and the fucking awful Mercury Music Prize. You see those Wellington Boots over there, yeah, well I wore those at Glasto in 2009, that's actual Glasto mud on those boots there, yeah, I'm thinking of getting them framed. And now you don't even have to go in to a record shop (I think they're called Sainsbury's these days) to get a special "Record Store Day Only Release" because folk like Norman Records are selling there stock Mail Order.
A decent and honest idea to get folk more interested in leftfield independent releases and to get them in to record shops has been hijacked (the terrorist group, the, the, the, the terrorist group) by the multi corporates. One of the hilarious things I noticed - Norman Records are selling the 808 State 12" "Pacific" (RSD Exclusive) for £16. You can by a mint copy of the original on Discogs for 80 pence.

The Dead Mauriacs track is from  private CDR released by the band / project to hear it in its' full glory please visit : http://www.acousticcameras.org/playlist/the-dead-mauriacs/ Also, if anyone has any information about the project Pecus then please let me know. "Flecks" comes from a 3" CDR and I have no idea where I get it from or who gave it to me (back in 2007). Any information will be gratefully received.

Next broadcast is April 28. 20:00 gmt. 102.5 FM or live stream at www.soundartradio.org and then there will be a months respite before we start up again on May 26 with some exclusive sounds from Thorsten Soltau, followed on June 6 by No Intentions "Special"!