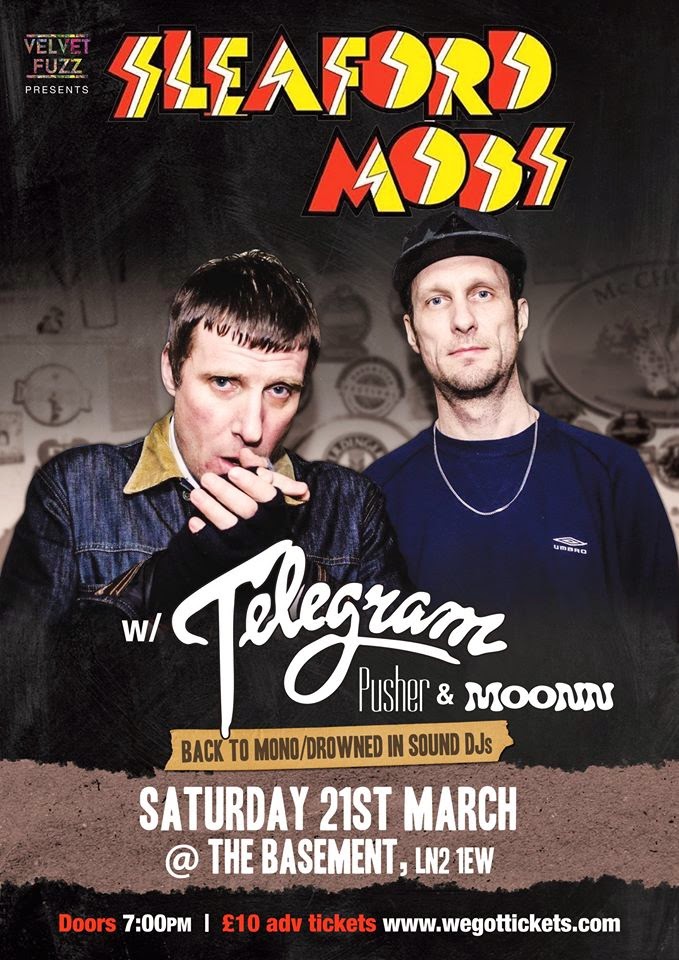 When the list of tour dates came out for the Sleaford Mods "Crap Towns & Shitholes" tour (my title - not theirs), one date stood out for me. Lincoln March 21. Sleaford Mods in my hometown of Lincoln appealed to me. The last gig I saw in Lincoln was in 2001. 999 at the Duke Of Wellington. I had seen 999 in Lincoln before, at the Regency Ballroom in 1978. ("Separates" tour). The gig in 2001 was rough with a load of old boys forming a "mosh pit" and dragging and pushing folk about the dance floor. Good humoured but still on the edge of turning nasty (nasty). Lincoln has always been like that though. Violent. Punk gigs in the past (1977-1979) always ending with a fight. There were shootings at AJ's, kids getting bones broken after nights at The Drill Hall (the pub across the road would do a cheap lager night to coincide so "kicking out time" took on a whole new meaning and it was every man for himself on Broadgate). I was at The Adverts gig in Lincoln Tech College when bricks and glass were thrown at the audience. A poor lad died after getting his neck broken at The Stranglers gig in 1978 and some poor soul got hooked onto a cars tow bar and dragged up Lindum Hill taking the skin off his back and legs. Rough times in a rough town. Tribal. I got the shit kicked out of me during Starjets set at Lincoln Drill Hall in 1979 - they were supporting Stiff Little Fingers, but The Starjets for fucks sake! I have seen Sleaford Mods a few times over the past 3 years - in the sticks, in the capital and even abroad and now I wanted to see how Lincoln would react. 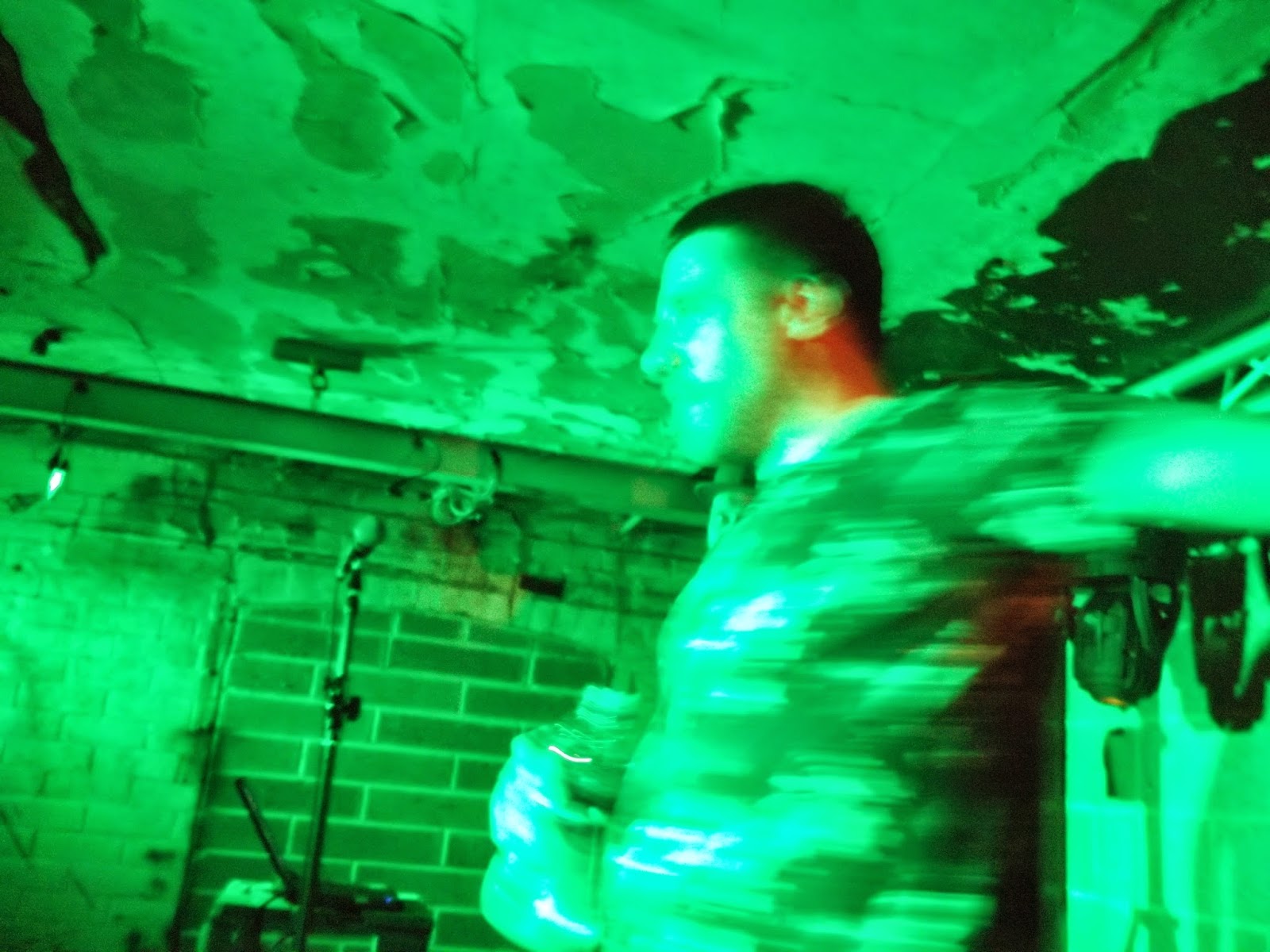 I rode into town with Steve Underwood and Jason in time for the soundcheck. The venue had been changed from a club called The Scene (or Swiss Cottage to us owd boys) to a club called The Basement. A 400 capacity venue underneath the old Conservative Club on Silver Street. Walking into the venue it became immediately clear that the venue could not hold 400 people, maybe 150 at a push. The venue was dirty, like an old squat from the mid 1980's with peeling brick walls, unswept floors and wires and loose light fittings everywhere. A motley crew were hanging trying to be louche by one of the bars in an ante-room. All black clothed and freshly coiffured. They stared at us, we stared at them. Mexican stand-off. ha! Step forward the promoter, a fat chap with hair three times bigger than Robert Smith, ill fitting black leggings and white cuban heeled winkle pickers. Comedy gold character number one. This guy was pissed as a fart on Strongbow at 5pm. He assured all would be fine and the support band supported The Horrors (and/or Telescopes) in Sheffield and in fact this venue was a lot like The Leadmill (in Sheffield) apparently. And when I say support band I mean headlining support band whose name was as large as Sleaford Mods on the flyers, a band called Telegram, a band who were "contracted" to get £250 of Sleaford Mods money for support, a band who are managed by…the dick that was stood in front of us .. the promoter.
The promoter carried on his spiel about how good Telegram are and how there's going to be an MC who was really funny and who'd do great banter with Jason. It was complete amateur hour.
The manager of the venue (the venue also had two other bars, for the more sophisticated clientele) shows up looking like Lincoln's answer to Danny Dyer and took us to the "dressing room", an out building decorated like an Hawaiian Beach Bar called Raoul's Love Shak. To quote Danny this was an out of the way quiet place where hen nights happen. A place where women can get drunk and suck cocks of the male strippers. The dressing room was a Cockhouse. Classy joint, but never mind - free bar! The Dinosaurs Are Stuck On Denmark Street / The Boots Of Hendrix Lick My Feet. (Sleaford Mods).

I missed the three support acts. Well, they all looked like NME reading Radio6 Music listening miserable cunts anyway with their stupid trousers and foppish manner. Why would they want to support Sleaford Mods?
A few minutes before "showtime" Steve and I got the merch' from the car and entered the venue. It was now we saw that they were still selling tickets on the door. Unbelievable. The promoter was nowhere to be seen, but neither was there anywhere to sell the vinyl and T-Shirts, so we decided to sell from the stage after the gig. Great plan. It was walking into the venue from behind the stage that the chaos became obvious. Barriers had been set up just in front of the stage but there was only one security chap to fend off the surging hoard. I took up prime position at the (safe) side of the stage. The DJ stopped spinning his Blondie and Blur records (only in Lincoln) and Sleaford Mods took to the stage ripping into "Bunch Of Cunts", it was like a pressure valve being released - they place went mental. The surge of the crowd, the human tsunami as 300 odd folk tried to get a look at the band in a space fit for only 100 or so. Onstage monitors didn't work and the sound was (allegedly) shit out front too. "Fizzy", "Jobseeker", "Tiswas" all came to great applaud and cheers but the crowd at the back were getting more and more angry by the situation. "Sack The Promoter". By fifteen or so minutes no fucker could see as half dozen burly security men stood in front of the stage trying to stem the surging mob. I could see fists flying in the bouncing crowd, the PA speakers rocking, bottles were thrown and the security blokes (trying to stop people from being crushed / injured) being spat at. This was like being back at The Drill Hall in 1978.
During all this I was stood next to comedy gold character number two, a short stocky fellow looking like Mick McManus playing a heavy in "Callan". White (wide) lapelled jacket, black polo neck sweater and loafers. Local hard nut and part time gangster stylee. When Jason called for calm and for folk to "chill" he stepped forward and gave the "Calm Down" signal with his outstretched arms and hands. It was as he saw himself as "The Daddy". No-one took a blind bit of notice (of course) of old King Canute. Fucking hilarious. The guy packed in and started hurling abuse at the security men. And the crowd carried on fighting and bouncing and fighting some more so management and security decided to call it a day, 30 minutes in and that's your lot. It was not pleasant to watch the mob turn ugly to see folk getting spat at and showered with glass just because they are trying to stop some kind of disaster. They too had to throw some punches and headbutt a few just to stay safe! It took me back to the days of The Specials, UK Subs and Angelic Upstarts at AJ's and Chelsea at the Tech Coll. Tribal and very very violent. 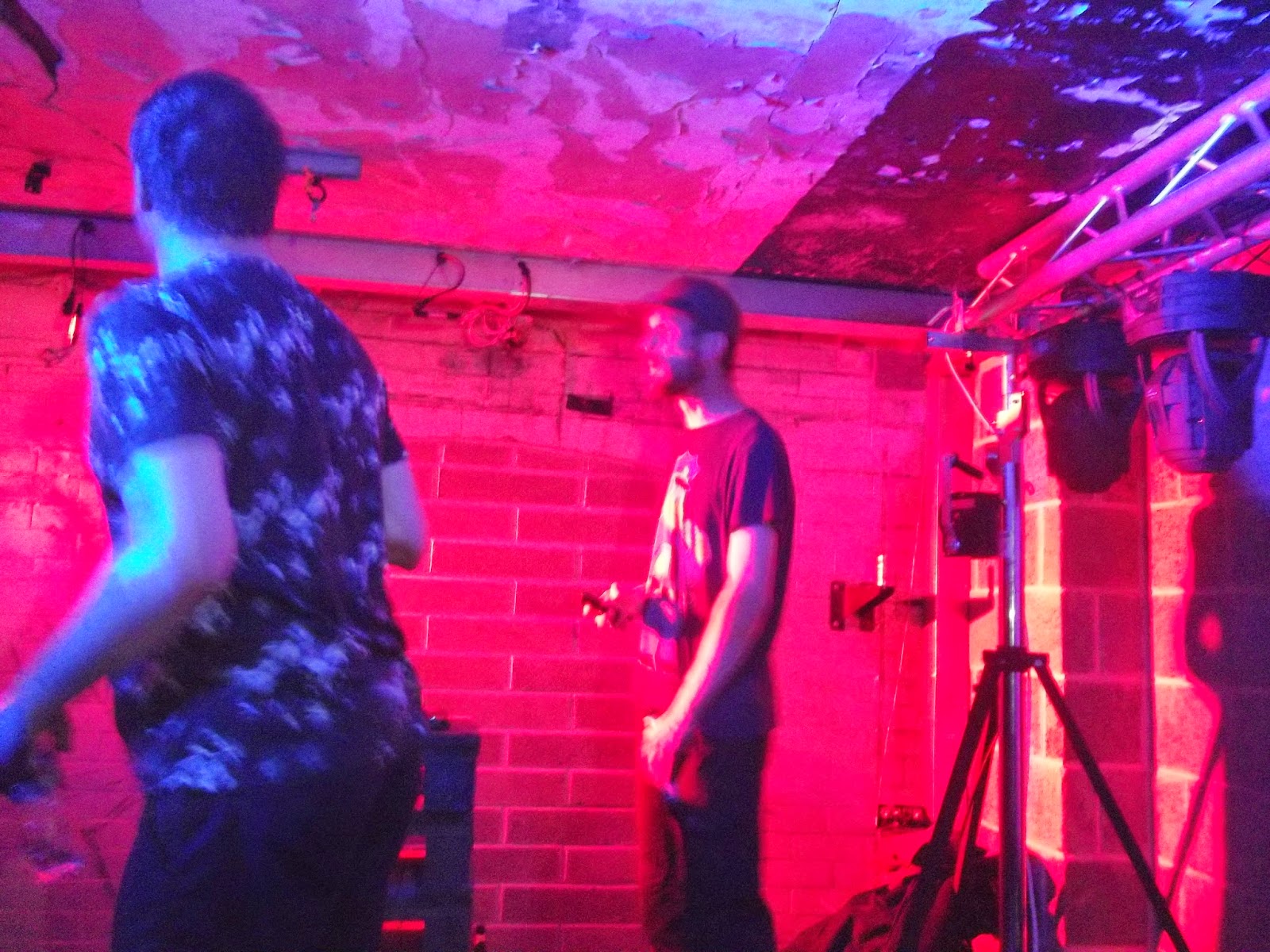 Riot gigs, don't you just love 'em? The last one I was "involved" in was SPK at the ICA (London 1985) when the London Fire Service brought a halt to the proceedings because of SPK's pyrotechnics. Lustmord wielding an arc welder. That night it was my job to rescue the Fairlights from the angry mob who were picking up and throwing metal poles and shattered glass, tonight it was to get the merch' to the car as quickly as possible. Steve did manage to sell a couple of LP's en route - ever the professional.
This was a top night and one I shall never forget. Somehow I don't think the promoter will either. He should drop the idea of being a promoter, realise he is but an amateur wanker in the world of professionals.

On the plus side I did get to drink in one of my old haunts, the Tap & Spile on Hungate and enjoy a Tex-Mex meal and glass of wine with Steve and Jason on the Brayford. I also got to meet and chat with Richo Johnson of Adverse Effect / Splintered fame who had flown in that day from Poland for the gig…there was some chap who had flown in from the US so neither Richo or I get the "I travelled the farthest to see this" badge.

Next Sleaford Mods gig for me will be April 1 at Exeter Cavern. "Sack The Promoter"! 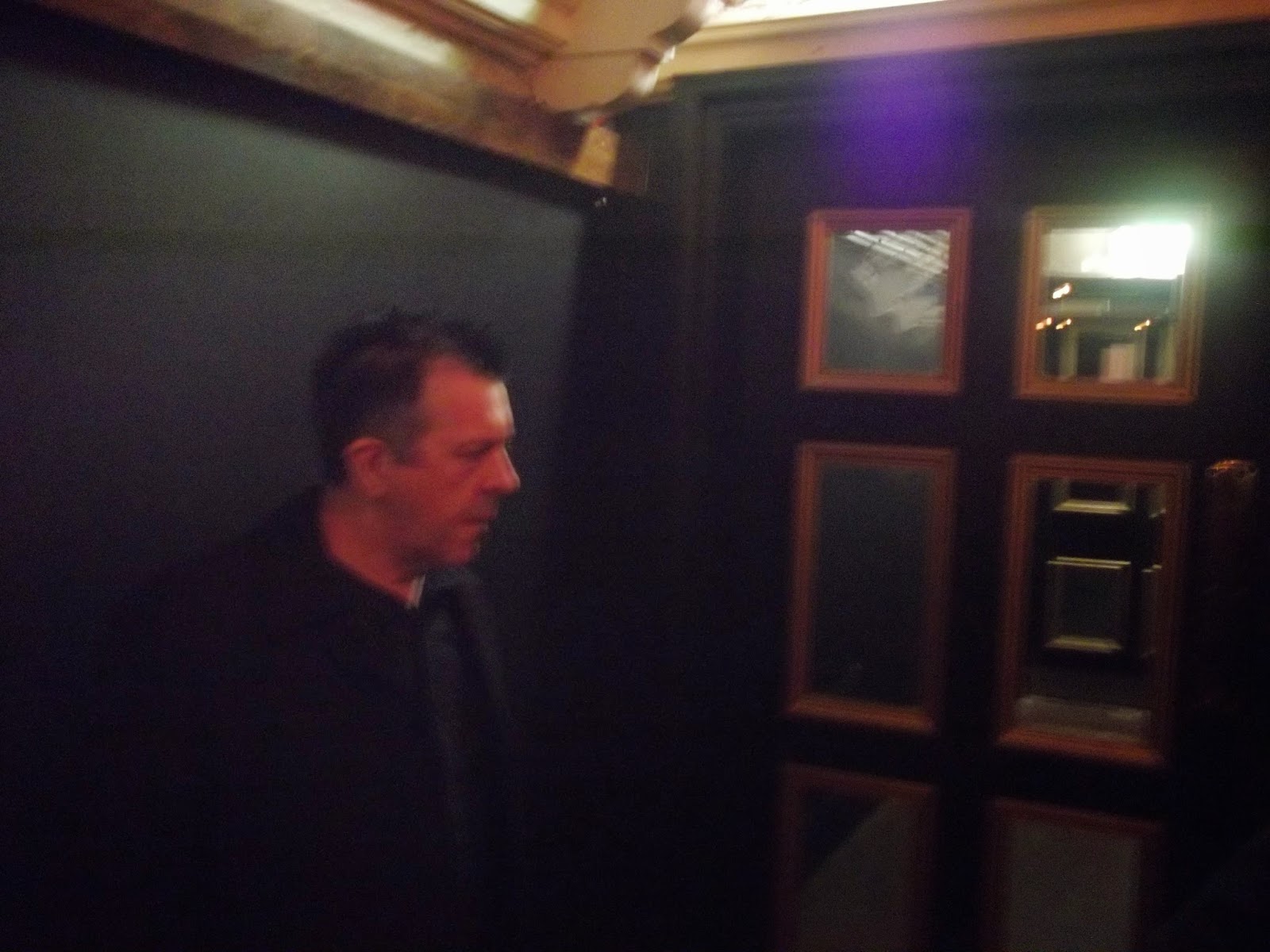