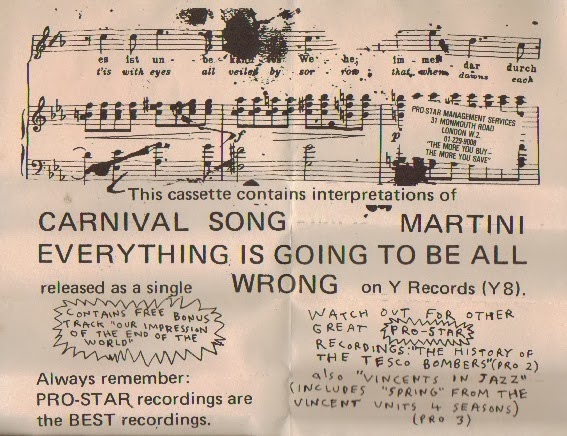 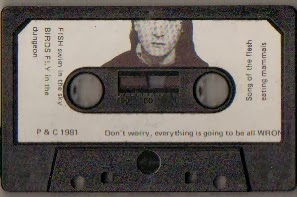 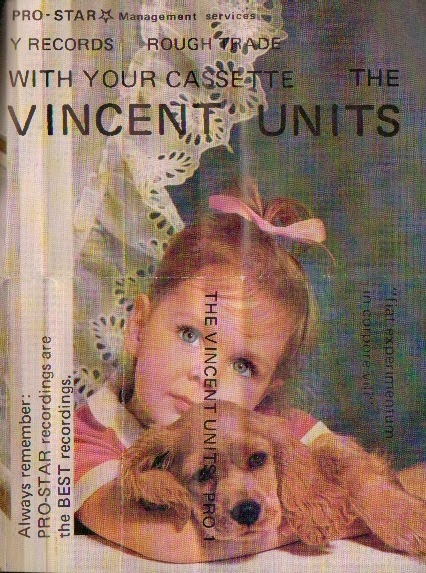 On last weeks MuhMur SoundArt Radio Broadcast I played The Vincent Units' "Carnival Song" as a "classic from the new wave era". Engineer Dave was ecstatic as it was a song he remembered from 30 odd years ago but had forgotten all about and never knew who it was by … he had it on a compilation cassette (I believe the youngsters call them mix tapes nowadays) given to him by Nigel Jacklin.
It was at this point that I had to declare my ignorance of who The Vincent Units were. I had / have always associated them with The Pop Group. Slits, Ilya Volkswagens, Maximum Joy etc - The Y Records connection and the dub, jangling ska type of sound … all very 1981 and CND badges.

Internet research. The Vincent Units were a spin-off project from The Tesco Bombers - a musical collective that also featured some members of The Homosexuals and future Sheriff Of Nottingham Keith Allen. (I like Keith Allen, I remember The Atoms, The Bullshitters and his alter ego Trawler Bates). The Tesco Bombers also released a single on Y Records. It was at this point I discovered there was a Vincent Units cassette released with different versions of their 7" along with live recordings, interviews and demo/rehearsal "jams". I found a copy floating around the world wide web for only a fiver .. bargain. The cassette is on the label Pro-Star Recordings (catalogue PRO 1). The inner sleeve also claims there is a release by The Tesco Bombers and a further cassette by The Vincent Units - is this true? Were they ever released? Can anyone help me here - I would love to know. I would love to hear too (again) if anybody can help out?

The cassette is excellent to listen to, a lovely trip down memory lane (great song). OK - it is dated in parts and some of the live recordings are crude and lo-fi - but it is of its' time and still sounds "fresh" in parts. Head Unit was a chap called Neal Brown who went onto become an author having biographies on Tracey Emin and Billy Childish published as well as writing the forward for Bill Drummond's book  "45".
Posted by Steve at 20:13