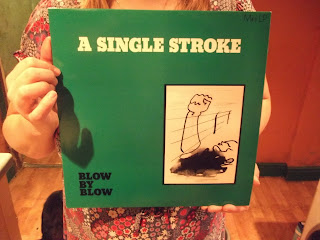 The other week I managed to find a copy of Human Trapped Rhythms LP "Falling And Drowning In You". I had been after this slab of vinyl for many many years, and it turned up on Discogs. I have mentioned Human Trapped Rhythms before on this blog. Manchester based project from the mid 1980's run by Pete Elliot. He used to release tapes and (one vinyl) album on his own label - Slip Records. HTR were an extension of Pete's political views, I know Pete through Direct Action Manchester (DAM) and the Hunt Saboteurs of the North-West and various meetings I attended (with my then partner who was part of all this "stuff"), we also popped in on Pete on a few occasions where Pete would play me his Whitehouse and Nurse With Wound rarities. Lovely chap.
The same chap who was selling the HTR was also selling the second and final release by Slip Records. "A Single Stroke" by Blow By Blow. I had to buy. A record that I have only seen adverts for in flyer & poster form. Blow By Blow is the duo Anne Stubbs and Pete Whitedog (AKA Pete Elliot). Anne used to be a hairdresser in Hulme (at the time) living on Charles Barry Crescent just a few doors down from me - recently she appeared on the compilation album "36 Aus 430 Von 30" that Berlin based Edizioni Passarotto put out earlier this year … Pete's whereabouts are unknown.
Blow By Blow are very much of the time. The sound (predominantly a Korg MS20) has the hard electronic rhythms of (say) Portion Control or Esplendor Geometrico but also the synth "pop" sound of (say) Bushido or Attrition. Very very very influenced by SPK. The SPK of "Machine Age Voodoo" and Side B of "Auto Da Fe". I think the term used these days is Cold Wave.
The mini-LP opens with "Blow By Blow" where Anne sings and Pete chants sounds like an SPK out-take. "Your Shoes" is Portion Control lite - I can imagine Dean growling out the vocals. "Fire Flies" sees Anne crooning out some Ballardesque lyrics that evokes Soft Cell. Two tracks on Side 2. "Never The Time" is "Synth-Goth" - again SPK circa "Machine Age Voodoo" or "Gold & Poison". The final piece features HTR vocalist Maria Hycz on harmonies. Electric bongos and flute accompany a choral piece sang in Latin.
The LP was recorded at The Kitchen. The Kitchen was a 16 Track studio situated at 511 Charles Barry Crescent. If memory serves it was owned by the band Dub Sex. I did some recordings there as Muhviertel. The engineer(s) were not set up for "experimental" music at all .. Indie was big in Manchester back then. James, Inca Babies, Edward Barton, Big Flame etc (all big `Hulme Favourites").

It would be nice to know what ever happened to Pete. It would be great to see some HTR / Blow By Blow / Slip Records retrospective (if your reading Frank)...
Posted by Steve at 16:42