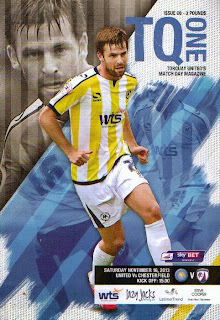 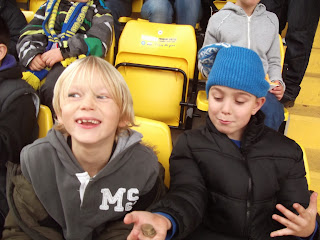 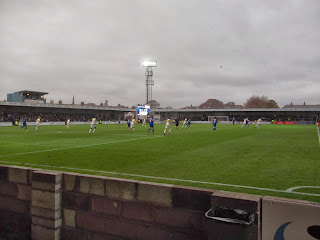 Thee last time I went to see Torquay United, it was a pre-season friendly against local rivals Yeovil Town who had just been promoted in to the Championship and quite surprisingly Torquay played Yeovil off the park, and won 2-0 in the process. The season has not started well for Torquay United, hovering just above or in the "relegation zone" for the season so far. So, myself with my son, Oscar and his best friend Jack, we decided to take the short walk to Plainmoor and give them our support. Crowds have been dwindling …
The opponents were Chesterfield (The Spireites … I love that nickname) who have been doing the complete opposite to Torquay United and have been nestled in the top three or four for the season. Since the pre-season friendly Torquay seem to have changed their tactics a little and decided not to play it to feet … no more pass & go just hoof the ball away from "our" goal. The players looked unfit. Jak McCourt playing in right midfield looked knackered from kick-off, and the centre half Aaron Downes looked frightened of the ball (a bit like the last time I saw Fellani play .. he must be a role model for old Aaron). The captain Lee Mansell argued with the referee more than trying to urge his team on and give support. A real bottom of the league scrap for Torquay who (in the end) came out two-nil losers.
Chesterfield were OK, they were just running in to a nine man wall, very little wing (or wide) play, but they were able to pass & move.
Attendance was announced at over two thousand, I would have thought half of that myself, perhaps they were counting season ticket holders who didn't show? At this rate I shall be enjoying Torquay United play Lincoln City next season. I told Oscar we shall go to a game over the Christmas Holiday, I wonder if Alan Knill will still be the manager …