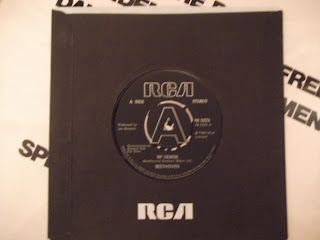 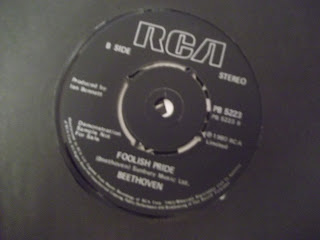 I have just spent a pleasant while playing a record that up until a couple of weeks ago I never knew existed. A few months ago - maybe last year (?) I wrote on this blog about my love for Gloria Mundi, the 1970's art-punk proto Goth rock band, the blog brought some fascinating comments and messages and now I know that Sunshine Gray is a working AV artist based in Lincoln and Eddie Maelov is a carpenter also based in Lincoln ... typical, I leave the City of my youth and ex-members of one of my favourite bands end up living there. To my knowledge Gloria Mundi only played Lincoln the once. 1978, AJ's Club with Patrik Fitzgerald and unfortunately I didn't go ... I was holidaying in Cornwall at the time.
One comment told me about a solo single from ex Gloria Mundi guitarist Beethoven (aka Pete Vas). I never knew Beethoven attempted a solo career, I knew that C.C. (the saxophonist) went in to The Spectres (with Glen Matlock) and Nigel the bass player went on to form Re:Flex and have an eighties pop hit with "The Politics Of Dancing" but we don't talk about him! So with the knowledge I put out an APB to find the Beethoven single and after forking out £4 I now have a copy.
From the single I can surmise that Pete is/was a great Bowie fan. He sings like Bowie - the arrangements are Bowie-esque. I know a lot of Bowie, I have a triple CD Box Set of his catalogue that gets played regularly on car journeys - my kids love Bowie and this single is very very "Bowie". The A Side is a love ballad called "My Demise" (pronounce "My Demeeeeeze") and has a lovely saxophone solo.....could that be C.C.? The B Side "Foolish Pride" is more up-beat, the guitar has the "Mundi" sound, there's a Mundi riff hiding in there, could be a Gloria Mundi out-take, but in essence it is a Bowie song.
Beethoven solo - like when Antony More signed to Parlophone Records or listening to Shrink on A&M.
I shall treasure the 7" like I do all my Gloria Mundi and Eddie & Sunshine records.
Posted by Steve at 17:22