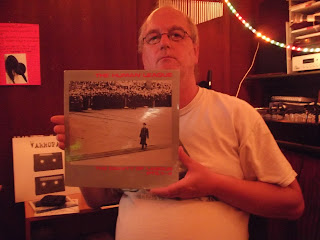 A rather "mellower" programme than usual, must be the summer sun. Before tonights programme I paid a visit to The Barrel House in Totnes. Geoff, the drummer from Animals & Men was playing a "Battle Of The Bands" type evening with his new group The Clock Surgeons. I was hoping to hear / see them soundcheck but organisation seemed amateurish and the PA Guys and other bands were very "rockist". Take the Rat People who seemed to want to use the soundcheck to rehearse and sounded like Mumford & Sons meet The Lighthouse Family...then there was some fat chap with an acoustic guitar who sang about fighting vikings dressed like he was about to have an evening down Dartmouth Yacht Club. He wanted "more stomp through the monitors". So, I never got to see The Clock Surgeons, their Vox Organ player (Geno) was telling me that they sound like something from "Pebbles" or "Rubbles" - psychedelic sounds. Hopefully they'll play a gig on a night I don't have to present a radio programme.
As mentioned, the first part of the programme is quite mellow, quite ambient. I am enjoying such sounds whilst the heatwave hangs over the South-West. A slight mistake during the Andreas Brandal piece when I accidentally pressed the "skip" button - apologies...but there will be more Brandal played in the future ... I also forgot my Crispy Ambulance "Fin" LP so had to mutter Hempsall's immortal "This one's a classic from the new wave era" myself! The Dieter Muh "We're Not Happy ..... Until You're Not Happy" is a version that was mailed to Spite back in 1999. It was to be part of a Spite double cassette compilation project that never materialised. Joel St. Germain - where are you now?

As always when I have archived the programme on Mixcloud I will type the link below.
Thank you for listening.