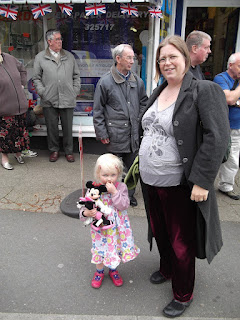 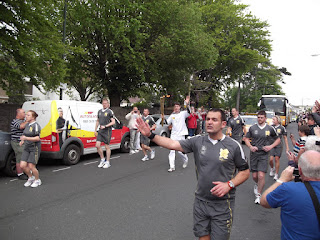 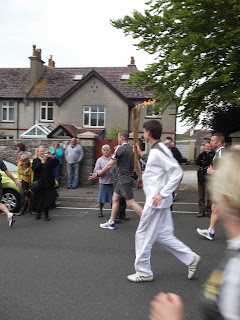 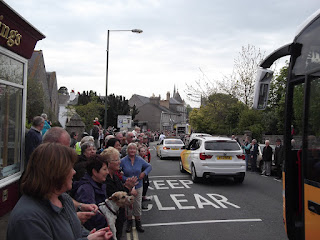 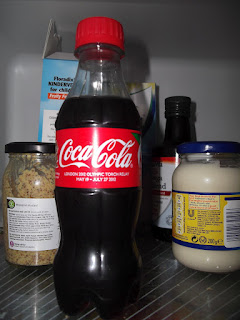 "The Olympic Torch is designed to shine through the centuries, a signal of peaceful understanding between nations, with the aim of arousing more and more enthusiasm for the ideal of humanity" (Carl Diem 1936).
The first Olympic Torch relay took place at the 1936 Olympic Games where a torch was lit in Greece and relayed across countries to Berlin. The torch was carried by athletes from Greece, Bulgaria, Yugoslavia, Hungary, Austria, Czechoslovakia and finally Germany - each athlete running 1 kilometre with the torch held high.

2012 and the Olympic flame makes it to Torbay as part of the torch relay throughout Britain in preparation for the London 2012 Olympics, it was also coming close enough to Hartop Towers to warrant the nomadic famalie Cammai to wander onto the streets of Saint Marychurch and "have a look". After all, not many Nazi ideas are still "used" these days - I thought it was worth seeing what all the fuss was about. The good folk of Saint Marychurch gathered in their hundreds to see the Samsung/Coca-Cola/Lloyds TSB Roadshow being followed by a flotilla of police motorcycles and then a man with a torch. They stood waiting for 2 hours to see an event that lasted roughly .... seconds. I was watching the relay "live" on the Internet y'see...I could see the delay, there was some guy in Totnes who just stood with the mini beacon and waved...then walked a few steps and waved some more, there were pensioners, folks with walking sticks and kids - not so much "Olympic Ideal"...more "Day Out from the Care Centre." Not really what Carl had in mind, so the whole event was running behind time. I left Hartop Towers when I knew I would only be waiting ten minutes...forward planning - always helps.
The kids were excited. It was "for the kids" as Jimmy Pursey would say. Oscar loved the police motorcycles and big busses and Isabel F. just wanted to make sure Minnie Mouse got a good view. I got tossed a "torch relay" bottle of Coca-Cola and with all the hoo-ha about 2012 memorabilia I might stick it up on EBay next week, well, if highly inflammable tracksuits and used torches are going for a couple of grand ... who knows.

That was my contribution to the Olympics - I doubt whether I'll watch any on TV .. they never show the football (I have become to hate highlights), I feel like I have done my bit!

Pictures.
1: Isabel F. & Tamsin wait in anticipation. (Oscar is looking at toys in the shop window).
2: The Torch approacheth
3: The Torch passes
4: The Torch heads towards Shaldon
5: My limited edition 2012 Torch Relay bottle o' Coke - what do you bid?
Posted by Steve at 20:26