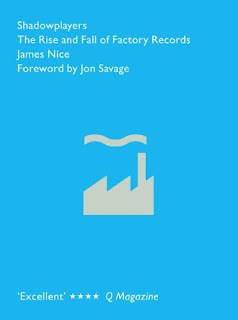 Most of July has been spent reading the very readable "Shadowplayers:The Rise And Fall Of Factory Records" by James Nice. After already having read the book "From Joy Division To New Order:The Factory Story" by Mick Middles (the guy that invented "The Movement With No Name" back in the late 1970's) I left this book alone for a while, but then came across a review which stated that this was a definitive account not just Curtiscentic but a well researched tome into the activities of all Factory Records artistes.
I'll just point out here that originally I bought from Amazon (UK) but my copy was faulty, they mailed me another which was also faulty so I wrote to the publishers, Aurum, and they mailed me an ideal copy straight away. Amazon (UK) meanwhile have charged me for the second copy because I never posted the first or second book back - they offered a postage refund (in the form of a token) but not a packaging one. They have subsequently lost a customer.
Anyway, back to the book.
(For me) Factory Records were one of those collectible "indie" labels back in the day. Like Rough Trade Records, Small Wonder Records, New Hormones, Fast Product, Mute Records, Crass Records etc. You trusted the ear of the label to provide the goods and 9 times out of 10 they did. Opening the account with the superb "Factory Sample" EP featuring Cabaret Voltaire, Joy Division, John Dowie and The Durutti Column and quickly following with A Certain Ratio's "All Night Party" the label (by 1979) was set up and running.
The book is split into years starting (briefly) in 1976 and the catalytic performance by Sex Pistols in Manchester. A moment in time excellently covered in "I Swear I Was There" by David Nolan, and taking off in 1978 and the birth of The Factory (the club in Hulme) and the setting up of the record label.
James Nice has every moment in the history covered, all the players and peripheral characters tell the story. Although James is obviously a Factory nerd, a self confessed "fan-boy" the book never becomes self-indulgent or like a thesis of sorts. Reading it took me back to the time when Factory Records were thee label. I was never a big fan of Joy Division - I liked them, they were good..but I did prefer Section 25 and A Certain Ratio at the time. My favourite on the "Factory sample" EP was The Durutti Column but the line-up that recorded those songs split soon afterwards leaving just Vini to carry on with the name. The vocalist of The Durutti Column at this time (Colin Sharp) has written an excellent book called "Who Killed Martin Hannett". I recommend it.
The book also follows the career of Pater Saville and (strangely) Orchestral Manoeuvres In The Dark and the birth of Factory Benelux and Les Disques Du Crepuscule, it really does leave no stone unturned in the Factory Records story. I do like the idea that after the death of Ian Curtis and the birth of New Order that Kim Wilde was seriously thought about as a replacement singer. Think what the state of the world would be like if that had happened!
I never saw a Factory band at The Factory although I did spend an evening in the club sat at a table with Tony Wilson, Bob Geldof, James Young, Pete Shelley and Derek Thompson whilst watching Martin Brahmah's post Blue Orchids band Thirst play (with Eric Random as support).
This was in 1983 and at a time when I was losing interest in Factory Records. There was only The Wake left by this time!
1982 covers the opening of The Hacienda Club, which I became a member of (for two years) in 1983. First band I saw there were the Virgin Prunes. Unforgetable. Christmas 1983, I spent my 21st at the club watching Cocteau Twins and Wolfgang Press. (The evening previous was The Gun Club and Lavolta Lakota and strangely enough these two gigs are the only ones James Nice went to). 1984 and The Hacienda was a regular haunt, especially Tuesday nights and a club night called "The End". There used to be around half a dozen folk in the place as the DJ blasted out punk / industrial / post-punk and reggae, we just used to nurse a pint for four hours and skin-up endlessly in the shadows. It was where I met a guy selling fanzines whom we nicknamed "Debris Dave" (he wanted my SPK badge, but I had to say no) - he turns up in the book as Dave Haslam, a Hacienda DJ in the 1990's. I see by the bibliography the he has written a book or two on Manchester music also, I haven't read any, but I'll try and hunt them out. Thursday gig nights were the same - an audience comprising of six men and Peter Hook at the bar. I saw Pink Military play to (roughly) six people...honest!
Best Hacienda gig? SPK (no...only kidding), The Residents & Snakefinger and Psychic TV with Ram Ram Kino...I missed The Final Academy and Dome.

The story takes a turn in the mid 1980's with the rise of "electro" music and New Order scoring a chart hit with "Blue Monday" and the following single "Confusion", and with Section 25 following behind with the flat and bland "From A Hilltop". 1984 is when I lost interest with the label. They were no longer collectible...just The Wake. It is around this time that Tony seems to fall out with his close friends and allies and Factory Records starts throwing money at impossible projects (films, art ventures, property etc). Unlike the book "Rough Trade" by Rob Young where the story gets bogged down in names and legal speak James keeps the downfall nice and easy to read.
Who killed Factory Records? "Madchester"? A Certain Ratio had gone Latino and a slight embarrassment. I saw them a few times in the 1980's as they slowly and progressively got like kitchen wallpaper. New Order I knew nothing about at the time. I recently bought the video "Substance" for 50 pence and it was awful. Bland in extremis - musically and visually and in the book the financial success of the label hung on New Order and they were just bloody awful, nothing more than a U2 support act.
As the good ship Factory sank, most jumped and with New Order splitting into separate projects the success of the label was taken over by Happy Mondays. Sink estate drug addicts. (I always preferred First Offence).

Excellent read.
James runs a label, a boutique label as he would call it, that deals in re-issueing old Factory Records releases aswell as Factory Benelux, Les Disques Du Crepuscule and New Hormones. LTM (Les Temps Modernes) has a website, so it is worth a google. The book also made me dig out an old letter I had from a James Neiss who in 1985 was just starting a label called Les Temps Modernes and he called the tape I mailed him "crap". Could it be the same bloke?
Posted by Steve at 20:30