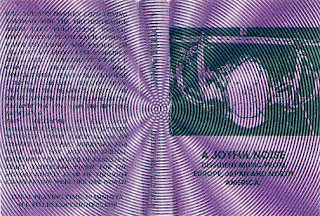 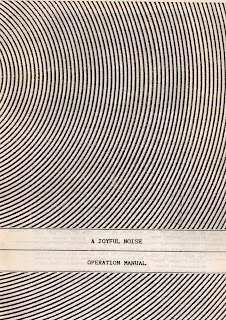 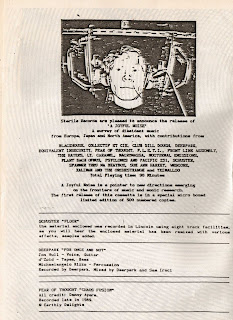 A while ago I managed to find a copy of the Sterile Records compilation tape "A Joyful Noise" on a trade list and snapped up the chance of owning a copy. I am a Schuster completest y'see, and a lover of the compilation.
Compiled by Nocturnal Emission and Sterile Records supremo Nigel Ayers from 5 years of tapes being mailed to his PO Box the release is a great guide, an aural window if you like, to the underground / sub-culture tape/mail-art "scene" of the mid to late 1980's. Many of the protagonists are on here.
There is a great sweep ( a choice) of styles on the tape. There's the "Eastern Feel" almost New-Age and Ambient artists, the Avant-Garde collageists, the 80's synth pop artists and the "Old School" Industrialist. In the mid 1980's I remember a lot of magazines coming with attached compilations like these and spanning a five year construction period the tape does sound dated in parts. (For some reason "Beyond The Pale" + "ND" just came into my head - 2 great American magazines that released the odd compilation tape).
Side A kicks off with an Eastern feel, with auto-harps, dulcimers and pianos all there in the mix. Sue Ann Harvey, Xaliman and Equivalent Insecurity Waspish (who?) are the first three artists before the Welsh project Plant Bach Ofnus change the mood slightly with a track that is akin to S.P.K.'s "Songs Of Byzantine Flowers" LP. Track 5: Psyclones with Pacific 231 mercilessly steals a Cabaret Voltaire drum machine pattern and sticks a violin over the top. Front Line Assembly and Club Dil Dough provide early EBM / 80's disco tracks. (Pretty poor) before Blackhouse come in with some great piano & voice experimentation and the track "Stairway 2 Heaven (Version)". NE side project Spanner Thru' Ma Beatbox slip in with a short two minute track before side A finishes with a great five minutes of tape crunching and looping from The Haters.
Side B begins with Collectif Et Cie, a French outfit I am completely in the dark with. The track "Snow Games" sounds like some Soviet/Eastern European animation soundtrack, the ones where the tall monochrome rectangle blocks of flats chase the small white mouse through triangular forests. The sound is random, angled electronics and extremely avant-garde. Lieutenant Caramel follow. Next comes two tracks of very dated nonsense, trouble is I haven't got a track listing to that tape and the track listing supplied by the "Discogs" web site is wrong. Track 5 on side B is Schuster with a remix of the piece "Floor" which was originally released in 1987 on the tape LP "Persecution Of Mistakes". "Floor" is a building / layering of hypnotic loops over a metallic drum machine and nightmare induced vocals. A tapestry of patterns. Next is Nocturnal Emissions with an extract from "Mouth Of Babes". Again, hypnotic loopery. Beautiful.
The last track is by Webcore, who I seem to remember had some TOPY link (but I could be totally wrong), anyway their submission is probably thee worst track on the tape. "Crusty Funk"! Awful.

Like I mentioned, the tape does sound very dated. It is...some tracks are over 23 years old but as a guide / a document of the times it is a great release. It lasts just under an hour and a half and comes in a small plastic case with booklet. I don't know where the track listing went but my secondhand copy never had one.
Worth buying for Schuster, Blackhouse and The Haters tracks alone.