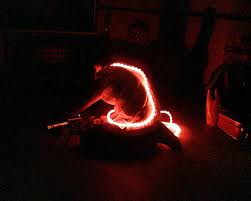 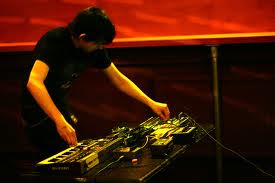 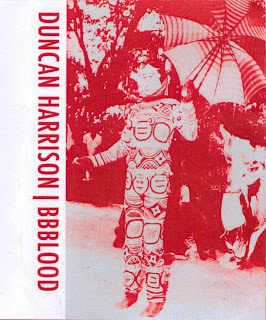 Another split release, this time by two stalwarts of the "electronic underground" scene in the UK - Duncan Harrison and Paul Watson AKA BBBlood.
This cassette only came to me a few days ago after spending a few months of
last year trying to get hold of a copy, I think I may have grabbed the last copy available. It sold out pretty damn fast and listening to it I can hear why. This enters the Top Ten list for 2010 releases.
Information is, again, pretty minimal. No track titles, no project title - not even a hint of a label name. What is it with folk who release tapes but don't like information?
Duncan Harrison gives us around 20 minutes of the sound of surfing the lightwaves and frequencies of radios. Sounding live and like it was recorded in an empty warehouse. There is a powerful heavy guitar sound building at the end. Very visual piece. BBBlood provides two "untitled" pieces. The first is a sound of interference. Static almost. Other noises creep around. The second piece is more organic, effected sounds through contact microphones. There is a small funereal keyboard sound drifting at the end. (BBBlood, putting the fun in funereal).
It is one of those tapes where you just keep flipping and playing, and enjoying.
Wondering whether or not this was a pre-planned "concept album" (Konzeptalbum) and just how the release came about I asked Paul Watson AKA BBBlood a few questions via E:Mail:

MM: Was there an overall theme / concept behind the split (or) where you aware of each others recordings at the time and thought "that'd make a good split"?
PW: Yeah, I did have some conversations with Duncan about the split before we recorded our tracks. I wanted to keep the sound restrained and on a very slow pace for my side. Before recording I had been focusing on sourcing some very different sounds that are looped in the first part of the track. The second is yet more loops that I've digitally processed and a contact mic' doing very little besides the odd crunch here and there. I really can't remember as I recorded my side probably this time last year.
I know Duncan changed his mind on what he recorded for his side a couple of times and he was really pleased with my side. I never actually heard his material for the split until I received my artist copies.
MM: Why is there no title to either the tape or tracks or label!?
PW: No titles from my side and it is self-released by Duncan. Hence very minimal information about either of us. Duncan has told me he is going to repress the tape soon as he sold out within a week,

A small insight of a worthy release. Keep peeled to the BBBlood blogspot for news of the second pressing release. bbblood.blogspot.com

Pictures:
1: BBBlood Live.
2: Duncan Harrison Live.
3: Sleeve to the "cassette with no name".