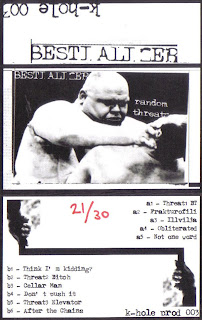 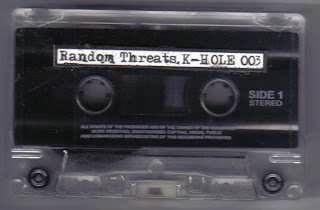 So far 2010 has seen three releases by the new project from Sweden's noise master Jocke Karlsson Kuren, and this by far is the best. That is not to say that it hasn't its faults, but it contains tracks of pure awesomeness that make it (for listeners of PE and Noise) indispensable.
"Random Threats" by Bestializer on the Swedish label K-Hole (which I imagine is Jocke's own imprint). Catalogue number K-Hole 003 (I have no idea what 001 & 002 are but I would like to hear them).
Treasured moments on this cassette are the three tracks entitled "Random Threats". Slices and samples of threatening voice and attitude lifted from films, everyday life and (probably) Jocke's ansaphone machine. Strong collages that generate their own violence. Clever and beautiful stuff. I have heard similar from the likes of The Grey Wolves and Con-Dom, now Bestializer join the ranks.
The last release I heard by Bestializer was the split cassette with Rumination on the Thorax Harsh label. The contribution there was disappointing, too mellow and synthesizer based. "Random Threats" has those tracks too. Obvious synthesizer sounds and whooshes that do nothing for me, it is when Jocke uses pure sounds, sampled sounds and generated sounds that loop, build and feed themselves where this tape comes alive. I think a C80 - yeah, this album is 80 minutes long - is too long for Bestializer. saying that though, side 2 has an epic piece called "Don't Push It". It is relentless in the extreme, punishing sounds of screams orgasmic and torture bounce around through a variety of effect nodes making it one of the best tracks I have heard all year and pushing Bestializer in to the "must hear" category.
The tape is limited to 30 copies, so chances are that they have all disappeared by now but try jocke@mellow.net for a copy.