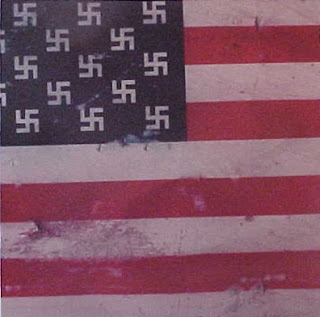 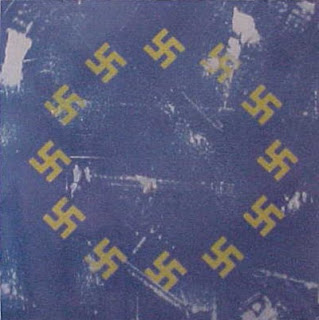 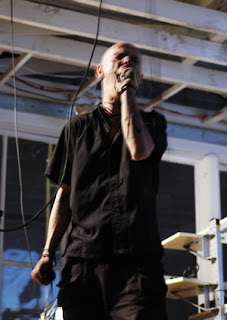 Just spent a pleasant while listening to the LP "They Live" by Dave Phillips. This is my first album by the man. I do have some Dave Phillips work on various compilations, but this is the only full length album I own. A fact that will need some rectification. I got this one from my good friend Steve Underwood who once or twice a year mails me a parcel of stuff.....thanks Steve.
The sleeve gives nothing away. The whole package is one of non information. Swastikas replace the stars of the states of America on the front and that of the stars on the flag of the European Union on the reverse. Nice touch, but probably damaging sales in Germany and Israel. The LP is called "They Live". Could be a soundtrack homage to the great John Carpenter film of 1988, or it could be a performance called "They" recorded "Live"? Could be neither. It's on RRR Records and carries no catalogue number...I tell you, information is kept to a grand minimum here.
I know Dave Phillips as a performance artist, a relative of Sudden Infant and a member of Der Schimpfluch-Gruppe. He was also a founder of the thrash punk band Fear Of God, whom I've never heard. It is sometimes a worry getting stuff (audio) by a (mainly) visual artist. Often the releases are documents and mean little to folk who weren't at or in on the event, so the disc went on the turntable with a little trepidation and a back up plan of sorting the washing out if it all went bland. No plan B needed, from needle to the record I was hooked. Attentively hooked. The start is of whispers and a struck bass guitar (amplified) - it reminded me of something. It was very Einsturzende ish maybe really early Laibach, the whispering turns in to chattering, in to straining, in to struggling. Passionate multi-layering of the voice. Very unsettling and in beautiful stereo. Side 2 and the bass is replaced for some time by the sound of (to these ears) a muted klaxon and the voices have become scratched and bowed violin strings. (Don't know why but Mauthausen Orchestra sprang to mind - not the Italian nolise outfit either). It all builds in to an orchestral sized cacophony, the voices return as does the amplified bass thump. It all ends on a beautiful lock groove.
Recommended.

I may have met Dave Phillips. I am uncertain. I was in Berlin in 2000 in the middle of the Harbinger Sound Travelling Circus & Freak Show Northern European Tour with Putrefier and Dieter Muh when we stopped off in Berlin and camped at Daniel Lowenbruck's flat for 3 days. (Berlin gig cancelled). One of the visitors that paid a visit to the flat was an English man who I think was Dave Phillips - we went for breakfast in a cafe and met people who could have been part of Column One. By this time the tour was in week two and time was spent being in an alcoholic fug. Beer was cheaper than water over there back then.

Hunt and find then buy this album.